A scene at the museum. Photos from the museum's WeChat account.

A featured component of ancient Chinese architecture, the pagoda has a special structure, with each tier telling a different story. These stories, spaces, and designs are closely intertwined with each other into a superimposed whole, formulating the external image and spiritual core of the exhibitions. “Nine-Tiered Pagoda: Spatial and Visual Magic,” launched by curator Cui Cancan and architect Liu Xiaodu this year, is a hands-on project that mixes ideas, methodologies and tools.

As the first project of “Nine-Tiered Pagoda,” “Unity Is Strength” is based on the works of Polit-Sheer-Form Office (PSFO), with architect Wang Zigeng creating the space and graphic designer Liu Zhizhi in charge of posters and other visual designs. A scene at the exhibition.

PSFO is an art collective founded by artists Hong Hao, Xiao Yu, Song Dong, Liu Jianhua and Leng Lin in 2005. “PSFO was chosen because of their concepts and attributes. As one of the longest-standing art groups in China, PSFO embodies the values of combination and symbiosis through the increasingly integrated individuality and collectivity. PSFO not only represents a new model of organization and creation, but also a form and concept of ‘Unity Is Strength,’” said curator Cui.

The exhibition hall resembles the 1970s Chinese tube-shaped apartments consisting of washrooms, a canteen, projection rooms and a barbershop.

As the second project of “Nine-Tiered Pagoda,” “Display and Replay” is based on the works of artist Li Qing, with architect Li Han creating the space and graphic designer Mei Shuzhi in charge of posters and other visual designs. 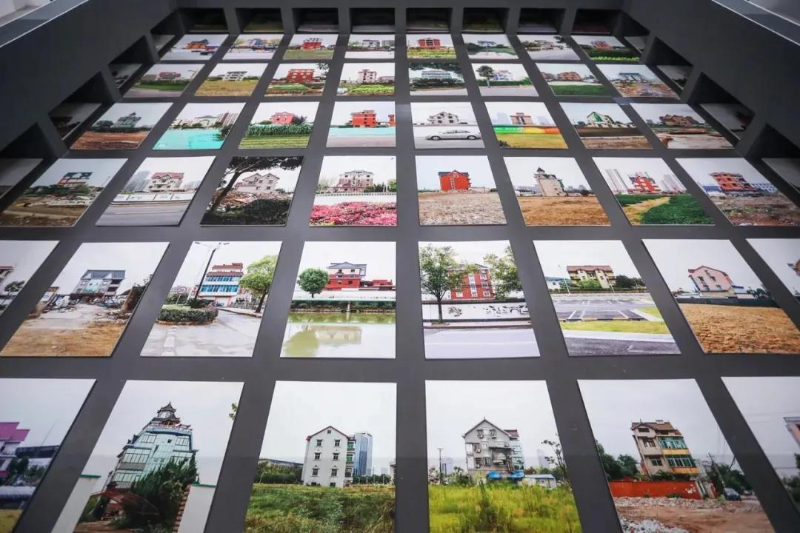 Works at 'Display and Replay.'

Last year, Li Qing held an exhibition at Prada Rong Zhai in Shanghai, where his work “Window” had a distinctive dialogue with the old residence, bringing the reenacted story back to its previous glory. His other window-themed exhibits are displayed in different times, with various states and fates. Some are carrying stories, some renewing hope and some just separating the distance.

“Li Qing was chosen because of the relationships between his work, architecture and design. Windows are naturally a part of a building. They themselves are also a kind of scenery. They are seen, experienced and observed because of ‘art.’ They represent the mode of this exhibition, with the space replaying and displaying the work, while the design summarizes and reconstructs the content,” said curator Cui.

“Similar to Li Qing, architect Li Han shares his concern for old and new buildings, urban and rural changes, and for different social groups. Li Han interprets the exhibition site as a building about to be demolished. All the buildings and archaeological sites record the fading history. Colorful tiles are decorating a dazzling dream,” said Cui.

Transport: Take the high-speed rail from Futian Station or Shenzhen North Station to Pingshan Station and then take a taxi